A week in the life of ... RESOLVE consultants | Going solo - Newcastle to Maryport

Nicky goes it alone with a breath-taking journey to Maryport in Cumbria and a customer research lab for good measure. 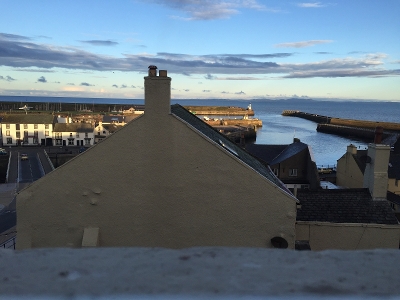 The journey to Maryport was long but thankfully was a single train journey with no changes. The scenery was breath-taking in the autumn sunlight, I'm sure the train passed Hadrian's Wall a number of times! For those of you that aren't quite sure, Maryport is in Cumbria about 30 miles down the coast from Carlisle.

After a welcome walk to the hotel, check in was quick and easy - lugging a suitcase and laptop bag up seven - yes that's SEVEN - flights of steep stairs nearly killed me! However it was worth it for the view of the port and across the sea to the Dumfries countryside.

After a delicious meal in the hotel restaurant and a great night's sleep, it was off to the next workshop. Getting in the building proved the first challenge of the day, this was overcome by waving at someone in the office. The next challenge arose very quickly, the designated room had recently been taken over by the organisation and so was not fully equipped. With no projector, it was back to the trusty flipchart!

By 9:30 all the slides were transferred to the flipcharts and customers started to arrive. Six customers were guided through the communications conversation. A different mix of people this time led to some interesting stories. They all went off happily with their GOSS pen(s).

After gathering all the notes and tidying the room, it was out in to the sunshine and a quiet break sat by the port in Maryport. Just wish I had more time to explore the port area.

After grabbing a quick lunch (the best hand cooked chips ever!) it was back to the station to catch the ancient train to Carlisle. It is funny the characters that you meet on trains, one guy had not been on a train for 30 years (it was probably exactly the same train then) and two youngish lads spoke about making gravlax - I thought they were more KFC type, just shows how deceptive first impressions can be.

Then it was on to the sleek Virgin train to Euston to meet Dave for the final day of focus groups. The train may have been sleek but it made me feel a little queasy as it sped along leaning into corners, perhaps that was my fault for facing backwards - I never did like roller coasters. Again there were some interesting travelling companions, including a gaggle of school girls who descended on the carriage for a couple of stops, some interesting conversations were had at a typically high decibel level, not sure that I want to repeat or share any of these. There was also a group of men, probably civil servants, who discussed the reason why they don't buy cheap charging cables for their iPhones - they smoke (that's the cables not the men) apparently.

Once at Euston, I managed to find Dave and we set off to Harrow, past an impressive Wembley Stadium.

We are two of the RESOLVE consultants working for GOSS Interactive, a small-medium sized company based in Plymouth. We spend our working days helping organisations undertake all forms of Digital Transformation and Channel Shift.

Dave is based on the beautiful Cornish coast and has been with the company for 5 years. He developed the RESOLVE consultancy arm of the business.

Nicky is based near to Bath in lovely Somerset, she joined the company a year ago after working as a consultant for a couple of years.

Both have (too) many years experience in local government and have delivered many transformation projects for many different organisations.

For more information about us, the work that we do and how we could help you deliver your transformation programmes visit

Next time in "A week in the life of ... RESOLVE consultants" Dave is "Going solo from Newcastle to Dundee"!