Our annual Digital Self-Service Survey results show how Public Sector organisations are changing their attitudes towards the length of time needed to implement services online. 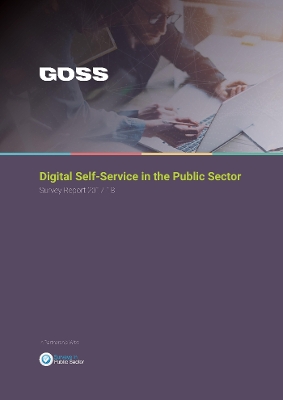 Now in its third year, the GOSS Digital Self-Service in the Public Sector 2017-18 is one of the UK's largest surveys of its kind. The survey demonstrates the dramatic rate of change expected within local government digital self-service delivery. Providing important insight into the attitudes of organisations within UK's public sector towards digital transformation.

Teaming up with Surveys in the Public Sector, the survey was conducted throughout July 2017, collecting responses from over 200 individuals from 179 organisations. Survey respondents represented a broad cross-section of roles across the public sector, including Chief Executives, IT Managers and Procurement/Purchasing roles. A complete list of organisations who took part, and the range of job roles covered can be found within the full report.

The most significant finding from this year's survey highlights how much the approach towards delivering services online has changed within Public Sector organisations, in particular over the past two years of survey results. Year-on-year when asked, "What percentage of services do you believe will be delivered online in three years' time?" the estimation of delivering a high proportion of their services online is had dropped. In 2016, 26% of respondents stated that between 75%-99% of their services would be delivered online in three years, whereas in 2017 this figure has dropped to 16% of respondents. Furthermore in 2016, 29% of respondents said that between 50%-74% of services would be delivered online in three years, whilst in 2017 this increased to 38% of respondents. This would suggest that Public Sector organisations are realising their optimism about being able to deliver a high proportion of their services online within three years. Consequently, the results are now showing a change in this behaviour with Public Sector organisations reining in their expectations and taking an 'evolutionary' approach over a 'revolutionary' approach to self-service delivery over the coming three years.

Even though the Public Sector's expectations of delivering services online is becoming more realistic, Rob McCarthy, CEO of GOSS Interactive shares concern over this type of approach. He states, "An evolutionary approach is lower risk and the success of the first services can be used to develop a business case for other solutions. This however, typically leads to a proliferation of systems and interfaces, which causes problems in streamlining the customer experience and becomes expensive to run in the long term." Rob continues, "Deploying a single digital platform to deliver all services in a unified system allows for a more coherent, planned approach. Although a potentially larger initial investment, it can realise a faster and consistent return on investment."

Ultimately the realisation Public Sector organisations are having of how long it takes to implement services online, may actually come back to cause issues when getting future services online in years to come. Essentially, Public Sector organisations are caught in a difficult situation, budgetary challenges limit their capability to take a revolutionary approach, whereas taking an evolutionary approach may limit their capability to get future services online. Rob McCarthy adds, "The public sector must take action now in order to meet the budgetary challenges it's facing while keeping the vital public services it delivers operational."

For the full report, a copy of the GOSS Digital Self-Service Survey 2017-18 Report can be found here.